Francesco Geminiani at All About Jazz 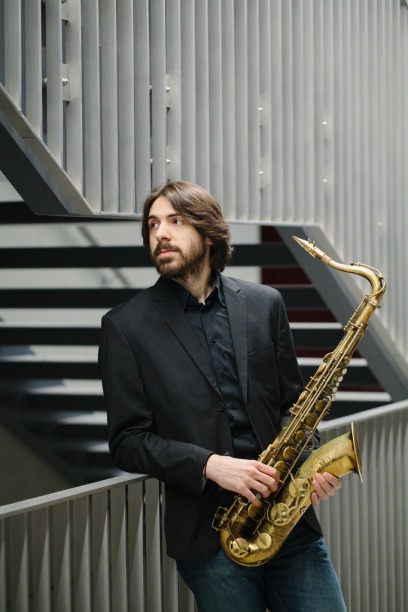 Francesco Geminiani comes from beautiful Verona (IT) before moving to Switzerland, NYC and Paris. An endless musical curiosity drives him across styles and melodies, sharing the stage with great human beings across the New and the Old World. Inspired by the masters, he embraces impressionism to connect with the curious listener.

Born in beautiful Verona (Italy), he began his musical studies at an early age choosing the saxophone as his main instrument.

Subsequently, In 2009 Francesco won the Siena foundation scholarship, being selected as the recipient by a jury of top-level international jazz exponents.

After obtaining his diploma in Verona, in 2010 Francesco moved to Switzerland completing his studies at the “H.E.M.U. (Haute Ecole de Musique) of Lausanne”. During his stay in the Helvetic Land he established himself as one of the most in demand saxophone players, performing at events such as “Ascona jazz”, “Verbier Jazz Festival”, AMR jazz festival in Geneva and Montreux Jazz Festival. He was selected to take part in the “2011 DKSJ All Star Band of Switzerland”, performing at all the main Swiss’ jazz clubs (Bird’s Eye, Chorus, Musikantine, Mehrspur); this ensemble reunited the very best student instrumentalists resident in the country.

2012 was signed by several great recognitions: Francesco was the recipient of the F. Jost foundation award in merit of his outstanding work as a performer and consequently won in the same year the national “Zorzella Award”; a jazz soloist competition held in his hometown.

In the summer of 2012 he auditioned for the prestigious “New School for Jazz and Contemporary Music”, where he obtained a scholarship that enable him to move to New York City to accomplish his jazz and classical studies and dive into the active musical scene that only this city has to offer. In 2014 he obtained his Bachelor in arts with honorable mention.

Since his move to the US, Geminiani’s level of musicianship evolved excelling in the performing arts as well as in the demanding and sophisticated discipline of composition. With great musical  guides, in 2014 he formed the Playwood chamber ensemble, for which he composed and arranged the entire repertoire successfully creating a unique blend of classical music and jazz that stands out for its originality. Within the last two years the band also performed events both in Italy and Switzerland.

In 2015 started the project “Colorsound”, this work has been entirely recorded and produced in New York City with some of the best up and coming young musicians: Rick Rosato and Bass and Mark Schilders on drums. His trio format has been heard in the New York and European jazz clubs during the winter tour in the end of 2015.

The Album Colorsound has been released in March 2018 by Auand records.